How to Rock the Acropolis of Athens, Greece, like a BOSS 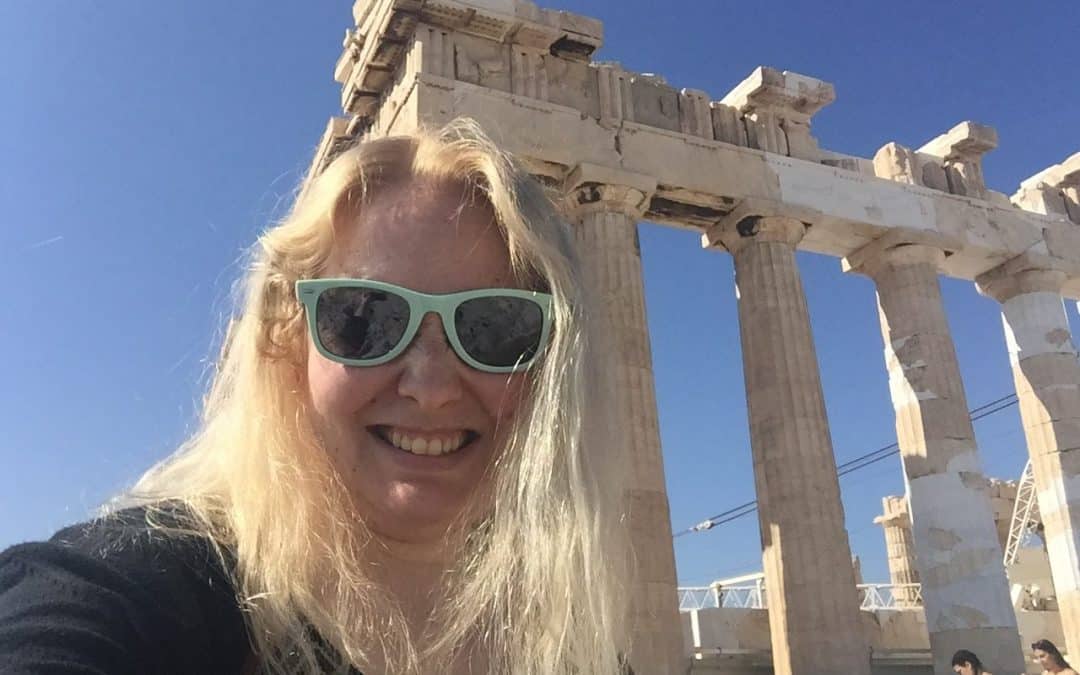 Contents hide
1 A is for Acropolis
2 I give the Acropolis an A for Awesome
3 Rock the Acropolis Like a Boss
4 1. Go early
5 2. Make sure you are H2O okay
6 3. Wear shoes with grip
7 4. Enter via the side entrance (across from the Acropolis Museum)
8 5. Sunscreen and a Hat
9 6. Make sure time is on your side
10 Additional Tips to Elevate you to Pro Status
11 That’s it! Go forth and be the Baller that I know you are!!

A is for Acropolis

Okay, so unless you have lived under a literal rock your entire life, then I’m pretty sure you’ve heard of the Acropolis in Athens. It is the beating heart of this ancient city and a monumental source of national pride (pun intended). I mean, Greeks revere the Acropolis so much that no other building in Athens can be built any higher than this temple upon a hill. That’s why today, these ancient remnants of Greece 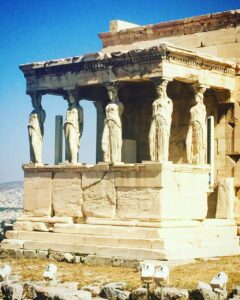 shine down upon every other edifice in the capital (if you have time you can also take some great Athens day trips too).
Because of this fact, you can argue that the Acropolis is probably one of the most important structures in the entire nation. But why? Sure, it is one of the most famous set of ruins in the entire country, perhaps even the world, but where is the significance of this gem of architecture? Come one, it looks like a bunch of columns falling down, that are held together by glorified duct tape. So why do we need to see it (Just kidding! I love the Acropolis. It satisfies my not so hidden history nerd within).

I give the Acropolis an A for Awesome

In spite of the hordes of tourists who are pushing, snapping selfies, and shouting in an assortment of languages that would rival even the halls of the UN itself, the Acropolis still kicks ass and takes names, in terms of iconic awesomeness that is (Even the fact that there is no shade and that the entire Parthenon is basically a giant construction site, can’t stifle my affinity for these jaw dropping ruins.).
Well, in spite of all this, the Acropolis is still a whimsical world of ancient architecture that transports you centuries back in time; for the bargain basement price of €20, (This is the price of an adult ticket. Children’s tickets are €10. See how I snuck the boring stuff you need to know in there? LoL). Just open your eyes, absorb everything around you, and a trip back into the world of gladiators and warring city states is all yours.
The Acropolis has this capability because it is arguably one of the most important ancient sites in the entire Western world. Crowned by the Parthenon, its marble monuments and sanctuaries exude a white glow that transforms into a caramel hue as the sun sinks beneath the horizon.

However, the damage done during years of foreign occupation has taken it’s toll on the majesty of this archaeological treasure. That coupled with pilfering, inept renovations, visitors’ footsteps, earthquakes, acid rain, and the 1687 explosion of the Parthenon by the Venetians has all irreversibly damaged this testament to human ingenuity and creativity. Yet, in spite of all this adversity, this architectural masterpiece still has the power to inspire awe and transcend the soul of anyone who sets foot upon this hill.

So now that you know how epically awesome the Acropolis really is (It has it’s own metro station. I don’t, so that’s a big deal. LoL), how can you roll through like a big shot? I mean, we know you are kind of a big deal at home, but you have never been to Greece before. It makes sense that you wouldn’t know the ropes because I didn’t when I came here, So let me share with you my 6 tips for rocking the Acropolis like a Boss!!! 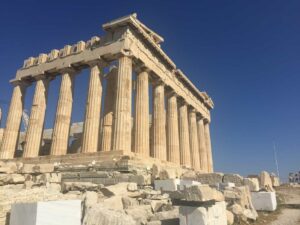 I know, getting up early on vacation can really suck, but it’s necessary. So many people roll through here, that if you come in the middle of the day, you will get jabbed by a rogue selfie stick. Plus, the only picture that you will get is of a surly looking, umbrella wielding tour guide (Don’t worry, she’ll find the flock of tourists that she is parading around.). Therefore, save yourself the crowd drama and go at 8 am when it opens. The Acropolis will not only be a lot less crowded, but it will probably be about 20 degrees cooler than in the middle of the day. It really is a win win. Oh, and if you’re thinking of going at night, you’re not alone because everyone wants to get that magical shot of the sun setting behind the Acropolis (Don’t say I didn’t warn you!).

I went in May and it was pretty hot then. I don’t even want to think about what it’s like in the middle of the summer, so I’m not going to. All I will say is that not only does the white rock reflect the sun right back at you, but there is absolutely no shade to be found anywhere. Like we’re talking desert status, with not an oasis in sight. So make your trip a little less arduous by bringing lots of water. You don’t want your mouth to resemble a coarse piece of sand paper do you? Yeah, I didn’t think so. You want to enjoy your visit and not feel like you have to steal stray water bottles when the tour guide isn’t looking (I got your back. I won’t tell.).

Oh my God. I was so surprised at how slippery the rocks on the Acropolis are. They are super smooth marble and when you try to stand on them, it’s like walking on ice. Seriously, I tried to be wilderness cool, like Bear Grylls, and climb this rocky alcove (I was all 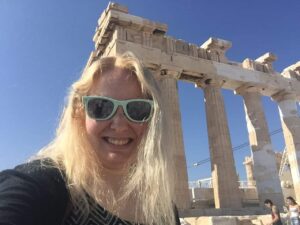 like, “Pssh. Stairs. Who needs them?”). Yeah, that worked out not so well. After about five minutes in my Tom’s, I realized that I was probably going to plummet to my death and become that tourist that everyone has to create a warning sign about (You know what I mean right? Like the person who fed the tiger and died, so now the zoo has the don’t feed the tiger sign. I was gonna be THAT person). Well, I am happy to say that no signage was created in my honor, but save yourself the near death experience and wear shoes with a lot of grip.

4. Enter via the side entrance (across from the Acropolis Museum)

Okay, the main entrance is the one with hordes of people. I looked at the line as way like, “Holy Hannah Athens! Are they gonna make it in before they qualify for the senior discount?” Seriously, it was that bad. Meanwhile, I inadvertently entered through the side and waited maybe 30 seconds (I did that totally on purpose by the way. No, just kidding. Not even close).

5. Sunscreen and a Hat

Did I mention that there is absolutely no shade on top of the Acropolis? I mean none whatsoever. Plus, the rock reflects the sun right into your face. So, if you don’t want to shrivel up like a California raisin, then I suggest you wear a hat and some sunscreen (They have really cool hats for sale everywhere so you don’t have to wear an ugly one. Promise.) I know we all want to have a nice, bronze glow, but thats why they invented spray tan. You get all the color and none of the wrinkles. Plus, no one wants to sport a sunburn in any of their selfies. Sunburns are just not that stylish this season. At least not according to Vogue (Ha! I have never read Vogue in my life. I only know the Madonna dance).

6. Make sure time is on your side 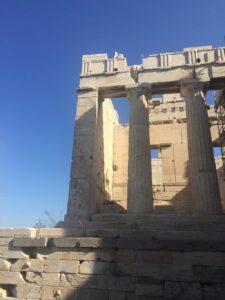 With such mesmerizing masterpieces of human creation as the Temple of Athena Nike, a plethora of fluted, doric columns, the Temple of Poseidon, Themistocles’ Wall, etc. (that is just to name a few of the archeological offerings here) it should come as no surprise that it will take some time to explore and truly experience all the delights that this site has to offer (Plus the site was higher up than I thought so it takes some time to climb to the top). Don’t rush because let’s be honest, this is one of those icons of human history that you may never experience again. So don’t spend the time constantly looking at your watch, wondering if you’ll make it to the next item on your itinerary. Instead, be in the moment and live in the unique world of ancient Greece. That’s why I would save yourself a minimum of two hours to take in all the ancient wonders that the Acropolis has to offer.
Honestly, you could spend a lot more time here, but up there, the sun is your enemy, not you friend (maybe even frenemy). That’s why you may need to exit the premises before you want to. Also, tour guides are available for hire at the main entrance of the Acropolis. They are extremely knowledgeable and enhance your appreciation of the monument as they take you though all the artistic nuances that the site has to offer.

Additional Tips to Elevate you to Pro Status

*Free admission on the first Sunday of the month
* Get a combination ticket if you are going to see any other ruins in Athens. Check what is included and the price online because the government changes this regularly.
*Open 8 am – 8 pm (last entry 30 minutes before close. Also closes at 5 pm between November and March)
*To get here, take the metro and get off of the red line at Akropoli (The metro here has only three lines and is super easy to use. Pickpockets are common though so always watch your purse)

That’s it! Go forth and be the Baller that I know you are!!