Le Chat Noir Paris, or the iconic Black Cat Cafe, is a historic Parisian establishment that is easily one of the most famous cafes in the city!

It’s an iconic place where you can go for a bite to eat and a quick coffee while you soak up the rich history of this once poppin’ (with a capital “P”) cabaret.

So, if you’re planning to visit Paris and want to learn all about Le Chat Noir Paris – including super practical info about the cafe’s history, where it is now, how to get there, what to order, etc.- then this is the uber-comprehensive post for you.

After all, I’ve been to Paris more times than I can count and always stop into the infamous, Le Chat Noir Paris every chance I get.

Therefore, if you too want to enjoy all the awesomeness that this incredible Parisian cafe has to offer, then grab a snazzy French beret because we’re about to swan dive into this wicked awesome post right now!

This post may contain affiliate links. Please see my disclosure for more information. As an Amazon Associate, I earn a small commission from qualifying purchases. 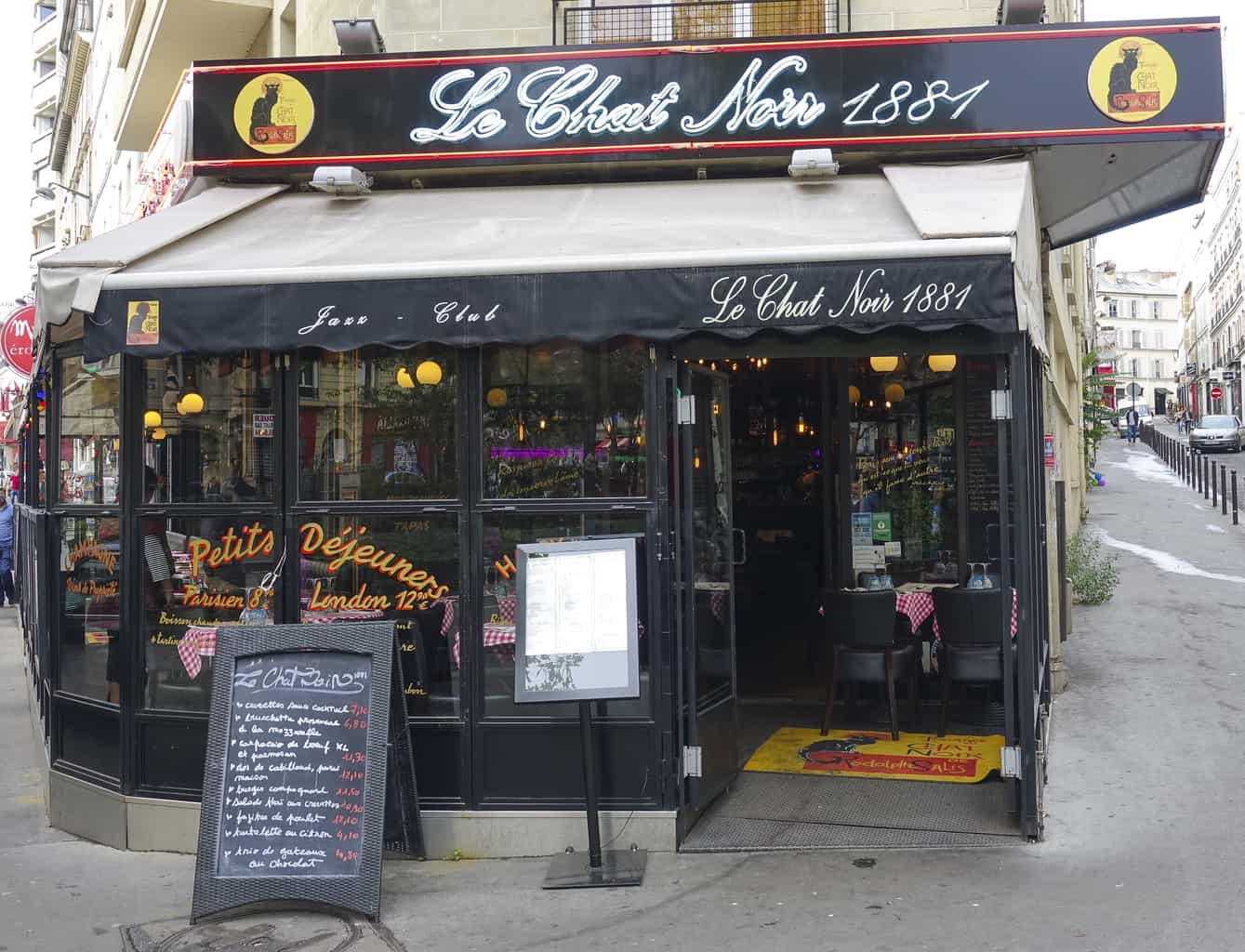 The history of this iconic and classy establishment begins way back in the 19th century. Local impresario and founder Rodolphe Salis was looking for a way to combine art with alcohol (he sounds like my kinda guy!).

So, he decided to start his own cafe, complete with lavish entertainment and tasty beverages.

And that was the beginning of Le Chat Noir Paris! On November 18th, 1881, Paris’ all-new, super chic hot spot opened its doors at number 84 on Boulevard Rochechouart.

One legend of how the cafe got its iconic name starts when Salis, while inspecting the rooms on Boulevard Rochechouart, heard the meows of a small black cat that was perched atop a lamppost on the street outside. He later took that same cat in and the rest, as they say, is history.

Another tale tells of how he found an old tomcat in the venue itself and took it in as a mascot for the establishment. Either way, history was made!

Now, on top of selling alcoholic drinks, the main draw of Le Chat Noir Paris was its entertainment. The cafe was a bustling, rowdy music hall, with singing and dancing on the stage while patrons sat and watched. And drank. A LOT. Did I mention it was Paris in the 19th century? 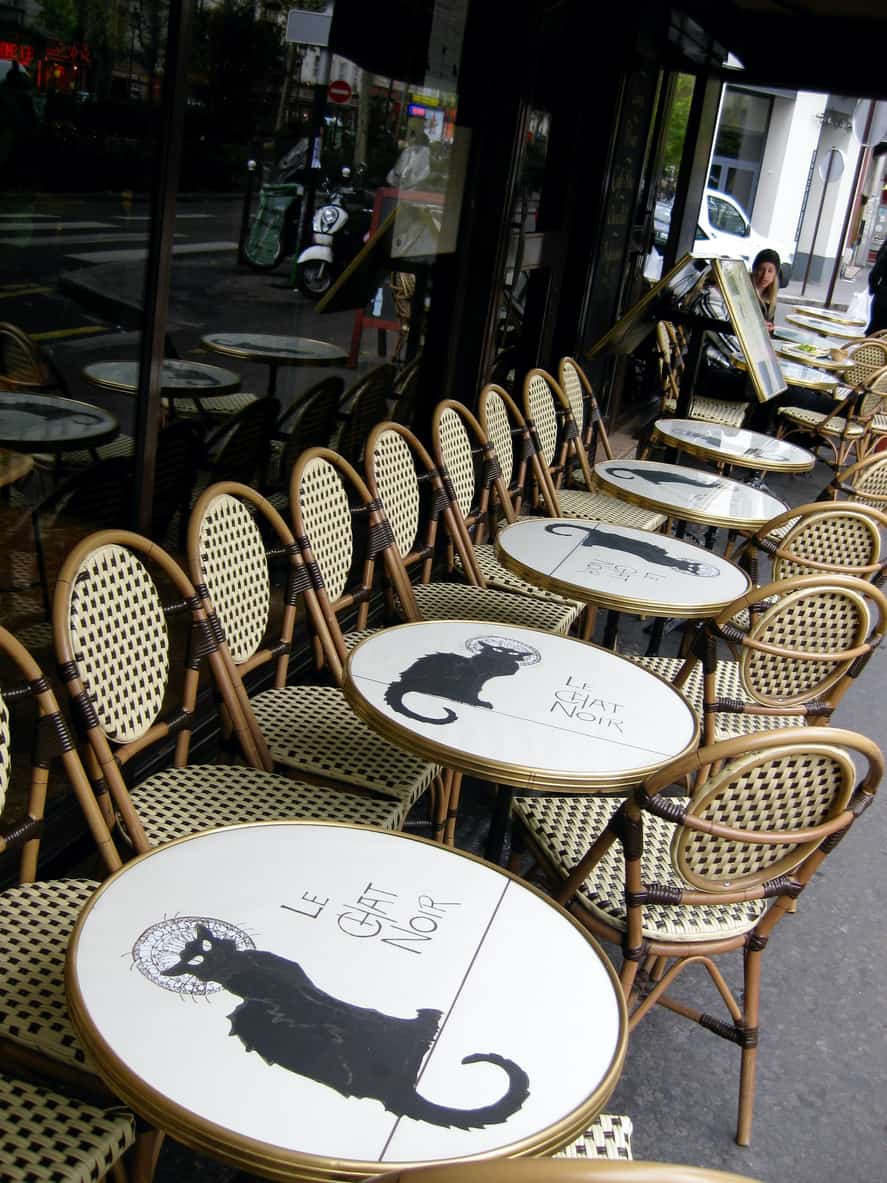 This cabaret became so popular and well known, that it drew in crowds from all over Paris. It was especially popular with the artists of the city, who gathered to drink and exchange ideas about the world and their latest projects.

In fact, some of the cafe’s most famous patrons included composers Claude Debussy and Erik Satie, and artist Henri de Toulouse-Lautrec. Talk about sophisticated!

Because of its success and popularity, the original venue on Boulevard Rochechouart soon became too small. See, the building was initially rented out because it was cheaper that way,

But now, this famous cafe had outgrown its little two-room space and simply couldn’t accommodate the sheer number of people who wanted to spend their evenings here. So, Salis decided to relocate.

Time for an Upgrade at Le Chat Noir Paris

In June 1885, Le Chat Noir moved to a new venue at 12 Rue Victor-Massé. Le Chat Noir’s new stomping ground was originally the former home of painter Alfred Stevens. And Monsieur Stevens had not lived in a small, modest house.

Because Le Chat Noir now operated in a lavish mansion!

It was old, and extravagant, and fitted the flamboyant tone that Salis was looking for. With the help of an architect by the name of Maurice Isabey, Alfred Stevens’ former house was transformed into a “fashionable country inn”. Now that’s more like it! 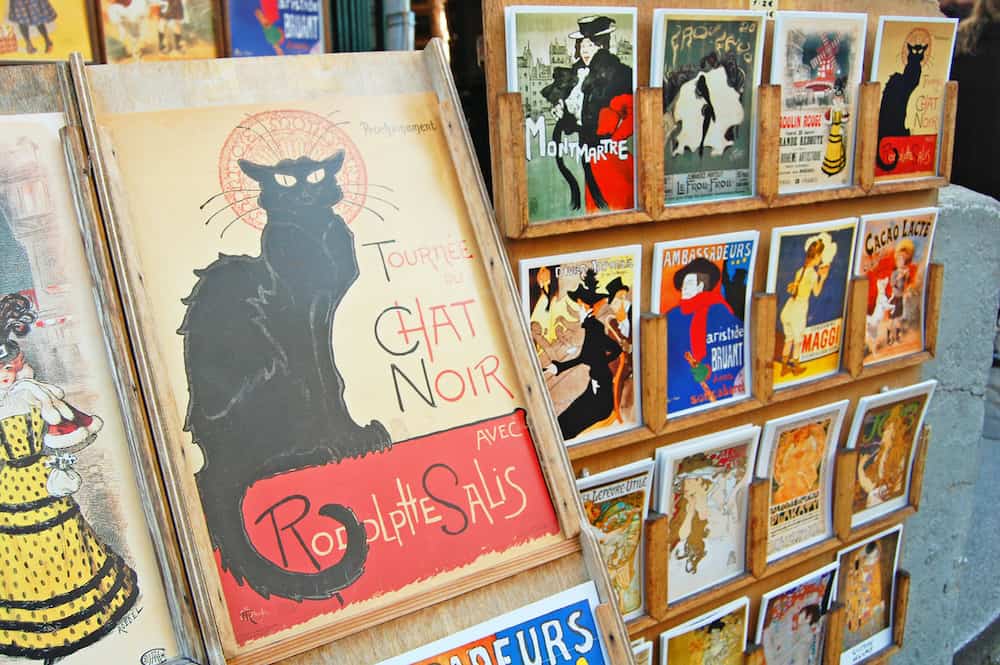 As with its previous address, the all-new Le Chat Noir Paris continued to attract all manner of creative people. Poets, singers, and writers all frequented this lively establishment. Performers, in particular, saw it as a great place to practice their craft on stage.

Owner Rodolphe Salis himself even took to keeping the patrons entertained. As patrons came and went, he would greet them loudly over the crowds, and in some cases, he would even insult those who were leaving!

He was a lot like a modern-day insult comic in Las Vegas, moving from table to table to talk to people and have “top banter” as the Brits would say.

And speaking of Brits, Salis once even insulted the future King of England when the man he was ribbing on turned out the be Edward VII on a trip to Paris!

Geez, it’s lucky he didn’t cause an international incident of some sort!

So There’s Singing and Dancing. Anything Else to See?

Shadow play is a form of shadow puppetry, where a huge screen would be lowered down, covering the stage, and puppeteers would hold up paper and metallic cutouts in front of big, bright lights, which would then cast huge shadows onto the screen for the audience to see.

The performers would then make the puppets act out anything they wanted!

And in other countries like India, Thailand, and Turkey, this style was used to tell historic stories and mythic tales. In Paris in the 1880s though, I think they might have had a few more comedies on offer.

Now, with all this extreme success, Salis decided to take Le Chat Noir cabaret on the road to other places, to further spread the word about his amazing show-stopping dancers.

To advertise this, he needed some posters made. And even though the tour was over a hundred years ago, you may well have seen one of these posters … 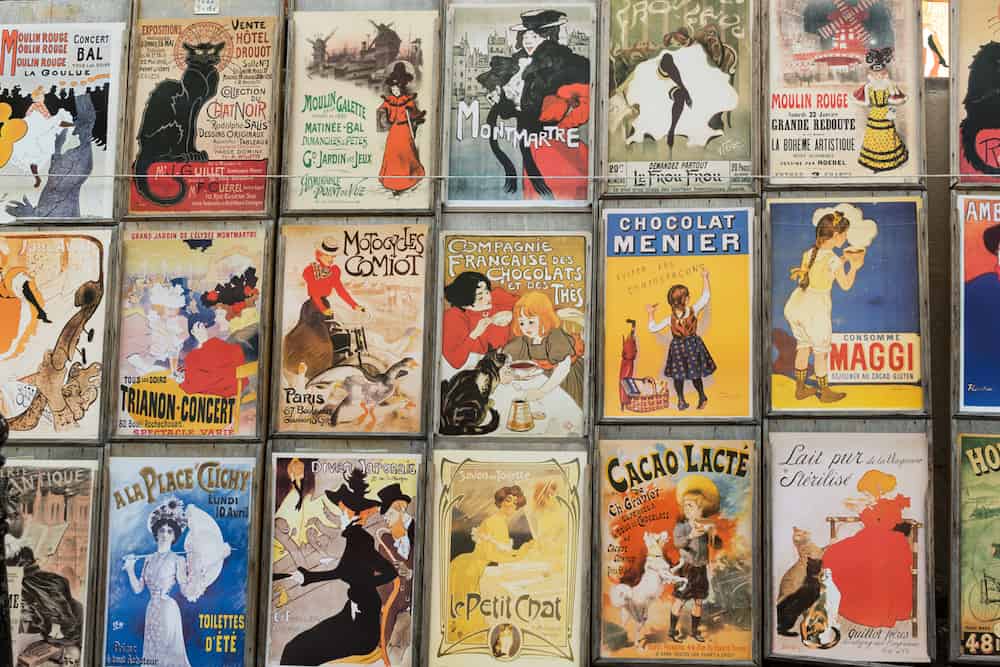 The famous poster was designed by Swiss painter and graphic designer Théophile Steinlen. And he was big into cats, y’all! So it’s very appropriate that he made the now ICONIC original poster for Le Chat Noir Paris. Yeah, a devoted cat lover is an obvious choice for a job like that!

In fact, Steinlen loved cats so much that he painted plenty of pictures of them, and also did regular sculptures of our feline friends. He even released a book of cat pictures: “Dessins Sans Paroles Des Chats” which means “Drawings of Cats Without Words”.

The poster translates as “The Tour of the Black Cat” because Salis had taken his Black Cat cabaret on the road. It’s one of the most striking and recognizable images in popular culture and has been included and/or parodied in a lot of other media outlets too.

In fact, copies have been seen in such classic movies as Breakfast at Tiffany’s, The Secret Life of Pets, and even Judd Apatow’s The King of Staten Island. Who knew the director of Superbad was so classy?

The 2nd Relocation and Reinvention of Le Chat Noir Paris

Sadly, Salis’ mogul lifestyle was not one he was able to live for long. In 1897, Salis died aged just 45 years old, and Le Chat Noir Paris began to lose popularity without his organizational skills, and his grandiose MC-ing and showmanship.

However, this is not the end of the story …

In 1907, a man by the name of Jehan Chargot opened another Le Chat Noir Paris cafe, in order to continue the brand and carry the torch of Rodolphe Salis.

The new location that he chose is 68 Boulevard de Clichy, where it still stands to this day. In fact, on this site, there is both a cafe and a hotel, both bearing the name Le Chat Noir proudly! And you can totally visit them!

How to Get There: If you’re already in the Moulin Rouge district, it is quite literally a one-minute walk from the titular building, and any neighborhood signs will point you in the right direction.

Alternatively, the nearest metro station is Blanche along Line 2 (dark blue). For buses you can take the N01, N02, 30, 34, 54 68 or 74 bus to the Blanche bus stop. You will know you’re definitely at the right stop when you see the big red windmill of the Moulin Rouge.

What to Eat: If you’re after French food, Le Chat Noir is a great option. They don’t have a huge variety, but what they do have is outstanding quality. Start off with frog legs covered in butter and garlic and then choose your favorite meat as a main.

If you’re a vegetarian, there isn’t much to choose from, but the good news is that you can go straight to dessert, and their desserts are divine! If available, I recommend the chocolate fondant with caramel sauce.

Prices: Considering the location and prestige, Le Chat Noir Paris isn’t extortionately expensive. Mains are typically €15 on average, while starters are about €10.

Well, there you have it ladies and gents! That just about concludes this guide to all things Le Chat Noir Paris!

If you found this post useful, be sure to join our email list now and then pin this post so that you can read it again later! 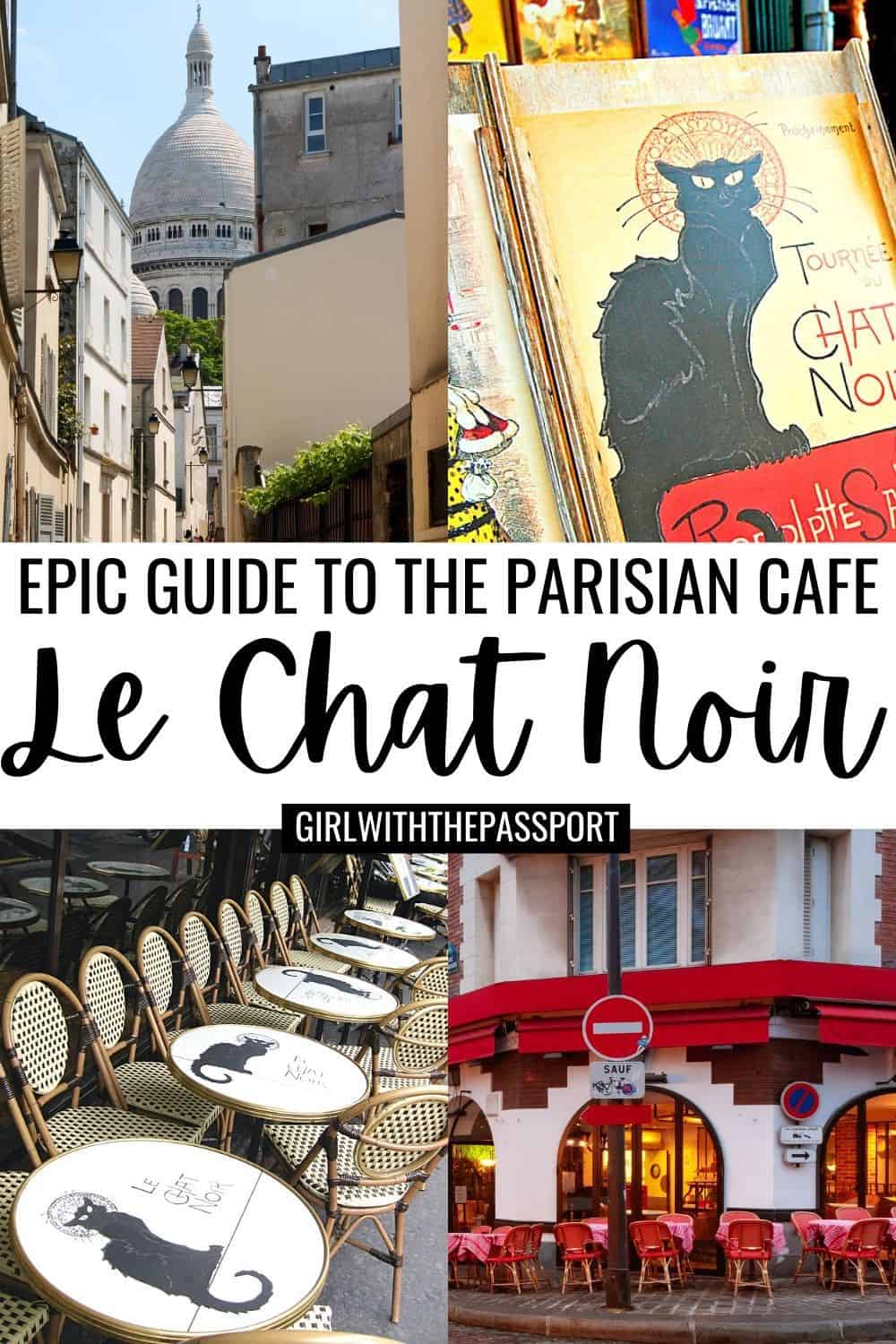 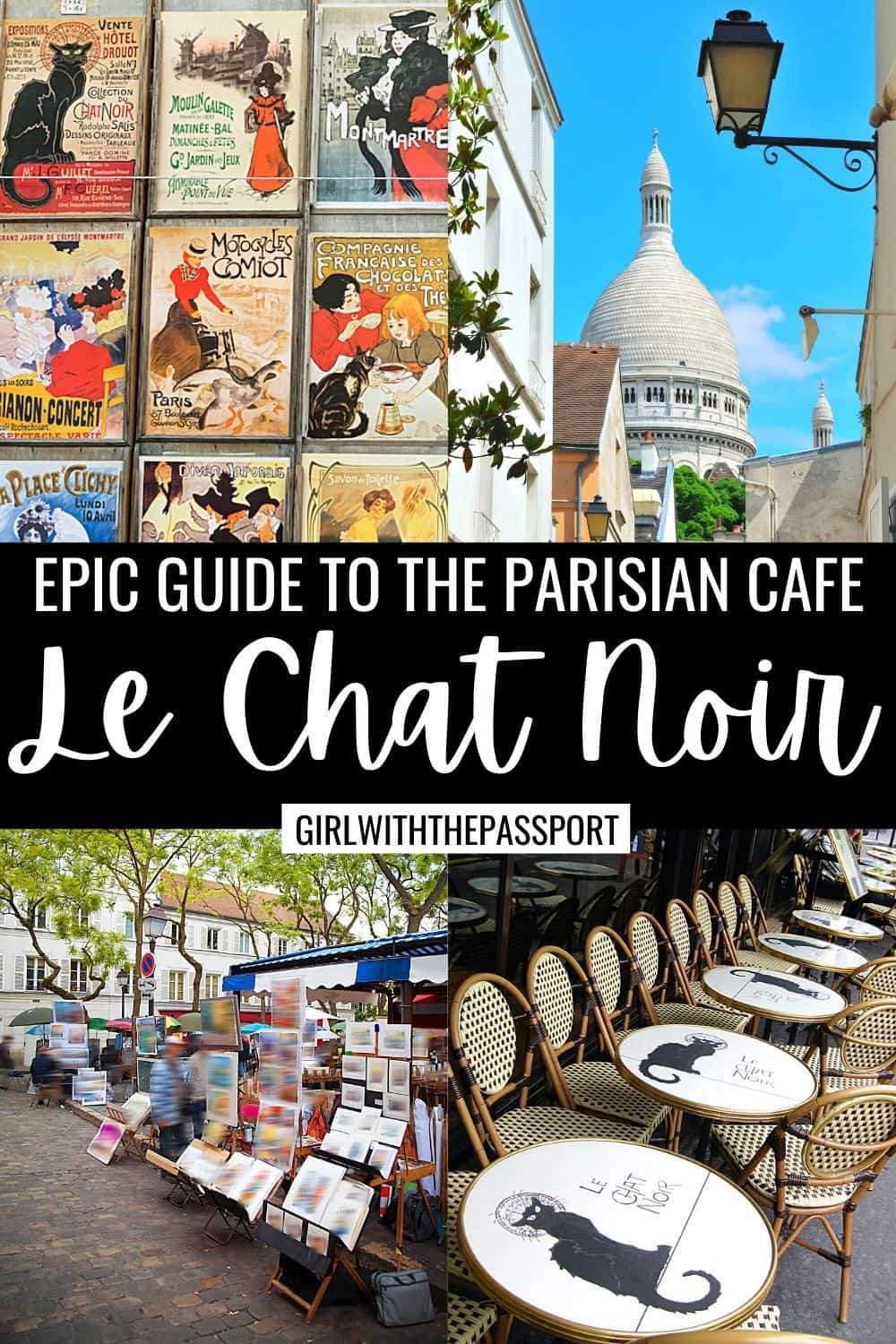 This website uses cookies to improve your experience while you navigate through the website. Out of these cookies, the cookies that are categorized as necessary are stored on your browser as they are essential for the working of basic functionalities of the website. We also use third-party cookies that help us analyze and understand how you use this website. These cookies will be stored in your browser only with your consent. You also have the option to opt-out of these cookies. But opting out of some of these cookies may have an effect on your browsing experience.
Necessary Always Enabled
Necessary cookies are absolutely essential for the website to function properly. This category only includes cookies that ensures basic functionalities and security features of the website. These cookies do not store any personal information.
Non-necessary
Any cookies that may not be particularly necessary for the website to function and is used specifically to collect user personal data via analytics, ads, other embedded contents are termed as non-necessary cookies. It is mandatory to procure user consent prior to running these cookies on your website.
SAVE & ACCEPT
37 shares