Looking for Alaska quotes and ready to get inspired to travel to Alaska with some next-level amazing quotes about Alaska? After all, this great state is home to one of the last great, untouched wilderness areas in the USA.

Therefore, it should come as zero surprise that there are tons of awe-inspiring Alaska quotes that are just waiting to be enjoyed. So, if you went to experience all that this Last Frontier has to offer then this list of quotes about Alaska and Alaska Instagram captions for Instagram will be perfect for you!

After all, I’m a born and bred American who loves Alaska with her whole heart and has used many of these quotes about Alaska to express her undying love for this great state of awesome.

Therefore, without further adieu, here is my super comprehensive guide to some of the most beautiful quotes about Alaska.

You’ll be delighted to know that Alaska has a couple of different nicknames. And those Alaska nicknames and Alaska sayings are: 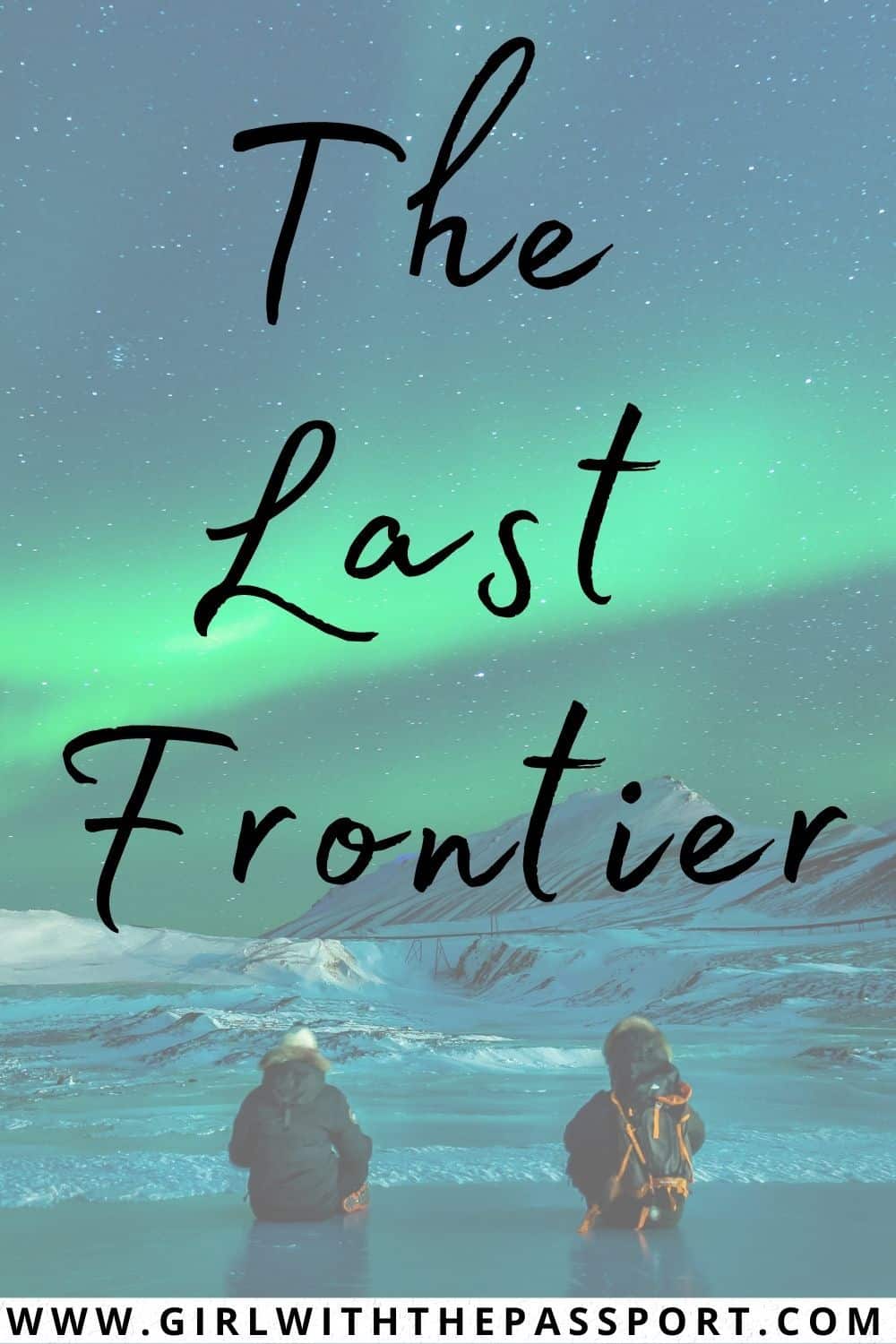 2. Land of the Midnight Sun

There are some famous and funny Alaska sayings and here are my favorites, Because most of these are really short quotes about Alaska, you could definitely use them in your Alaska captions for Instagram. 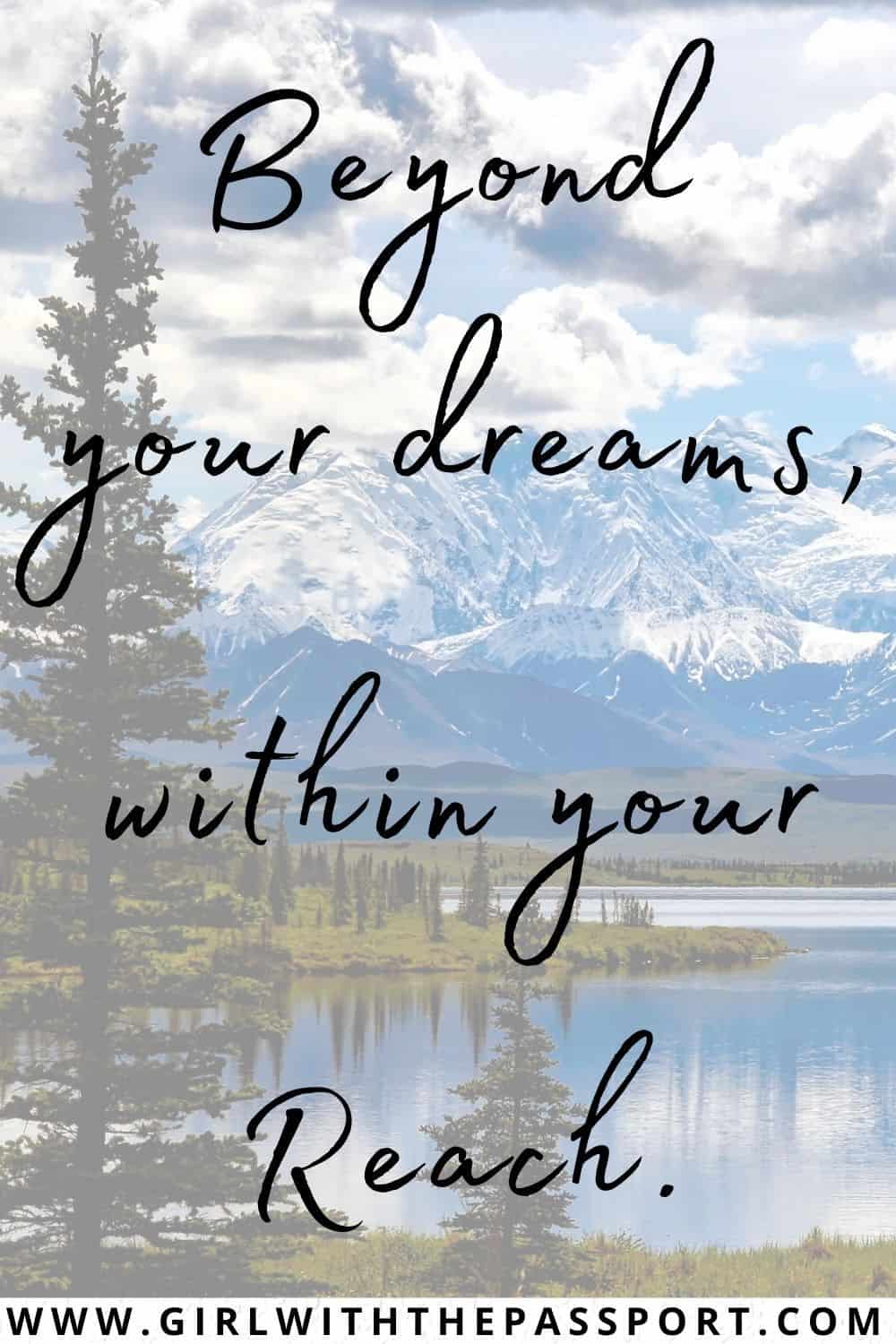 10. “Beyond Your Dreams, Within Your Reach.”

15. “I can see Russia from my house.” (my personal fave quote about Alaska)

19. “Alaska itself is an unusual state.”

23. “I am working for Alaska’s best interests.”

32. “There’s nothing cooler than an icebox.”

35. “The land of glaciers, wilderness, wildlife.”

37. “Come to Alaska and club a seal on your winter safari.”

Here’s a list of some of my all-time fave quotes about Alaska. Feel free to use this in any of your Alaska Instagram captions to help jazz things up a bit and increase engagement. Because if you’re looking for Alaska Quotes then this is the post for you! 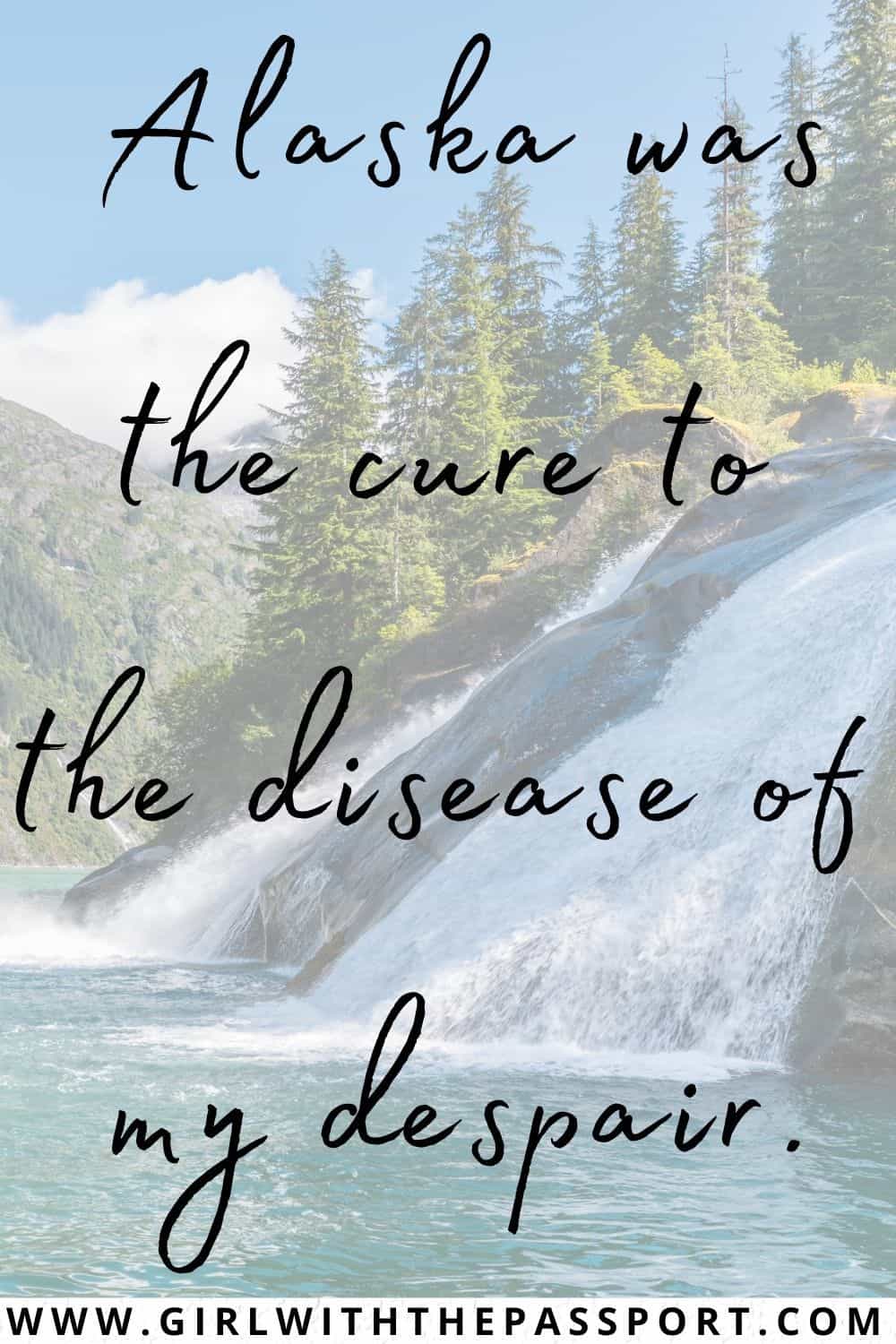 After all, this section has a John Muir Alaska quote or two and is brimming over with some great quotes about wilderness too!

39. “With the most powerful binoculars, I cannot see Alaska.” – Mikheil Saakashvili

40. “John Muir, the famous naturalist, wrote in his journal that you should never go to Alaska as a young man because you’ll never be satisfied with any other place as long as you live. And there’s a lot of truth to that.” – Tom Bodett

41. “What I miss most about Alaska is the fishing.” – unknown

42. “You can’t just make yourself matter and then die, Alaska, because now I am irretrievably different.” – John Green

45. “Alaska was the cure to the disease of my despair.” – Summer Lane

46. “Alaska has long been a magnet for dreamers and misfits, people who think the unsullied enormity of the Last Frontier will patch all the holes in their lives. The bush is an unforgiving place, however, that care nothing for hope or longing.” – Jon Krakauer

49. “To the lover of wilderness, Alaska is one of the most wonderful countries in the world.” – John Muir (great John Muir Alaska quote)

50. “Despite everything, every piece of Alaska sang to me. I remembered every curve in the trails, every tree in the forest. It was familiar to me, comfortable. The more I thought about leaving it, the less I liked the idea. This was my home.” – Summer Lane

51. “Like any traveler, I’m always looking for those experiences that are almost unique to any place, and watching films around Alaska of the skies in winter made me want to taste those unworldly showers of light in person.” – Pico Iyer

52 “Each evening the night swallowed the sun and gave the raven the sun’s energy. He stored this power in his wings, tinged with the blue of Alaskan skies.” –Suzy Davies

53. “It’s from an Aleut word, Alyeska. It means ‘that which the sea breaks against,’ and I love that.” – John Green

54. “Alaska is what happens when Willy Wonka and the witch from Hansel and Gretel elope, buy a place together upstate, renounce their sweet teeth, and turn into health fanatics.” – Sloane Crosley

55. “When I was 23, I went to Alaska by myself into the glaciers of the coast range and climbed a mountain by myself. It was incredibly reckless, incredibly stupid. But I was lucky. And I survived, and I came back to tell my story.” – Jon Krakauer

56. “For sheer majestic geography and sublime scale, nothing beats Alaska and the Yukon. For culture, Japan. And for all-around affection, Australia.” – Sam Abell

57. “Alaska itself is an unusual state.” – Fareed Zakaria

58. “Yeah. If I were your age, startin’ fresh… Alaska. It’s the last frontier. Up there, you can be anything you want.” –El Camino

59. “The mountains are calling, and I must go. ” – John Muir (another great John Muir Alaska quote)

60. “Two kinds of flocks come up to Alaska, Cora. People running to something and people running away from something. The second kind-you want to keep your eye out for them.” – Kristin Hannah

62. “Kids in Alaska don’t know they’re growing up on the Last Frontier. It’s just what they see on the license plates, and it’s something tourists like to say a lot because they’ve never been around so many mountains and moose before.” – Tom Bodett

63. “The simple fact is this: when you go to Alaska, you get your ass kicked.” – Mark Twight

64. “It was a cold, bleak December morning in Alaska, a place so far north on planet Earth that if there were such things as popsicle people, they could live there quite comfortably.” – Dew Pellucid

65. “We grew up in Alaska and will rep The North Face all day long.” – John Gourley

67. “It’s not like Alaska isn’t wilderness – it mostly is. But most Alaskans don’t live in the wild. They live on the edge of the wild in towns with schools and cable TV and stores and dentists and roller rinks sometimes. It’s just like anyplace else, only with mountains and moose.” – Tom Bodett

68. “I don’t understand why you’re so obsessed with figuring out everything that happens here like we have to unravel every mystery.” – John Green

Looking for some witty, totally awesome puns about Alaska? If so then this expertly curated selection of Alaska puns is sure to Northern Light your fire. After all, who doesn’t love funny Alaska sayings that really have a way with words?

So, if you’re looking for Alaska quotes that will make you giggle then these Alaska puns will be right up your alley. 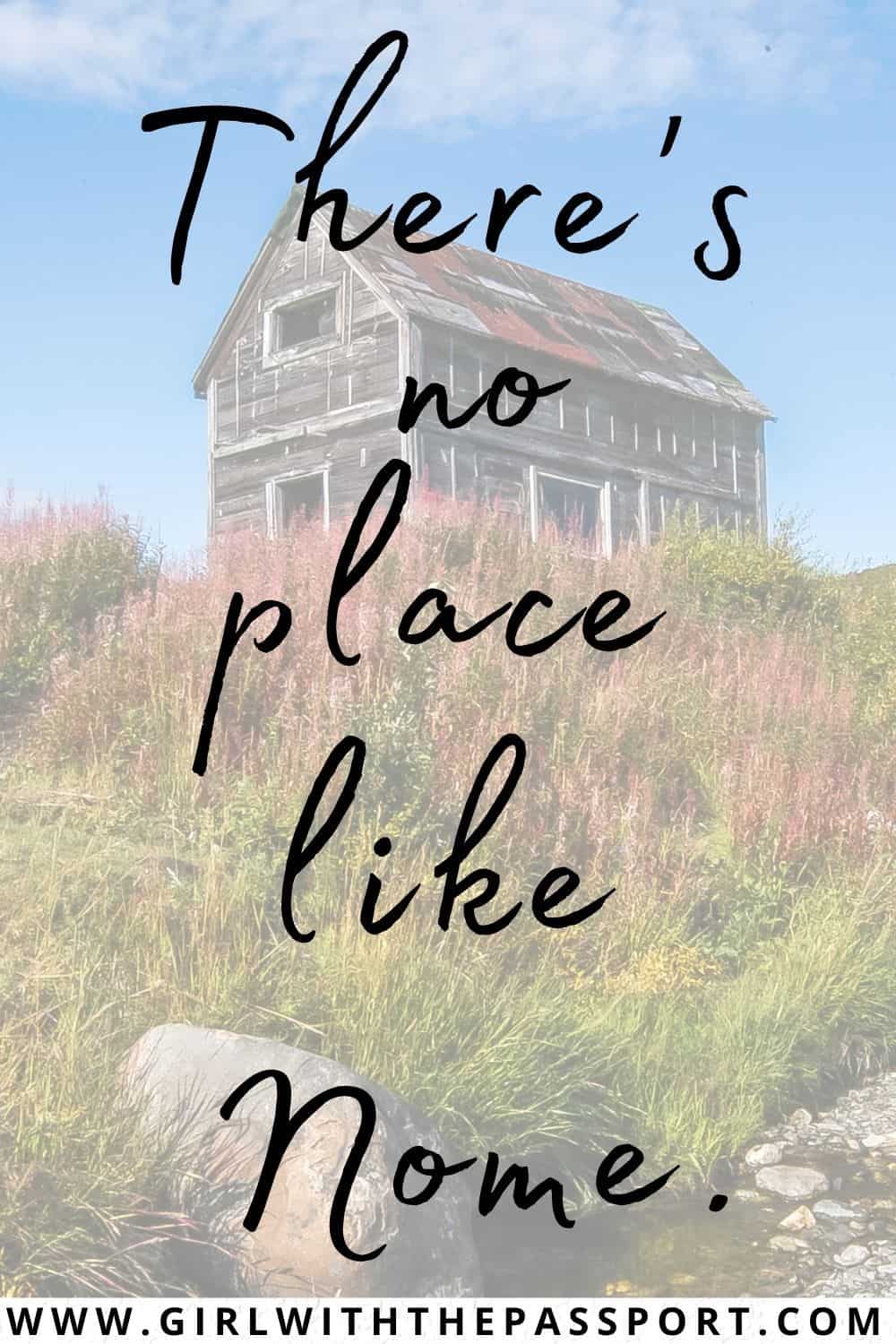 70. Most Alaskans don’t keep their money in greedy banks, they keep it in Fairbanks.

73. Did Juneau that Alaska has its own capital?

74. Lots of women wish they could say Iditarod.

78. This place is Totem-ly awesome

81. I spilled something on my shirt. Do you have a Tidewater Stick?

84. If the Ninja Turtles moved to Alaska, they’d live in Seward.

89. I always feel Whittier in Alaska.

That’s why, if you’re looking for Alaska quotes that will give you the best laugh that you’ve had in a while then this is the section for you! 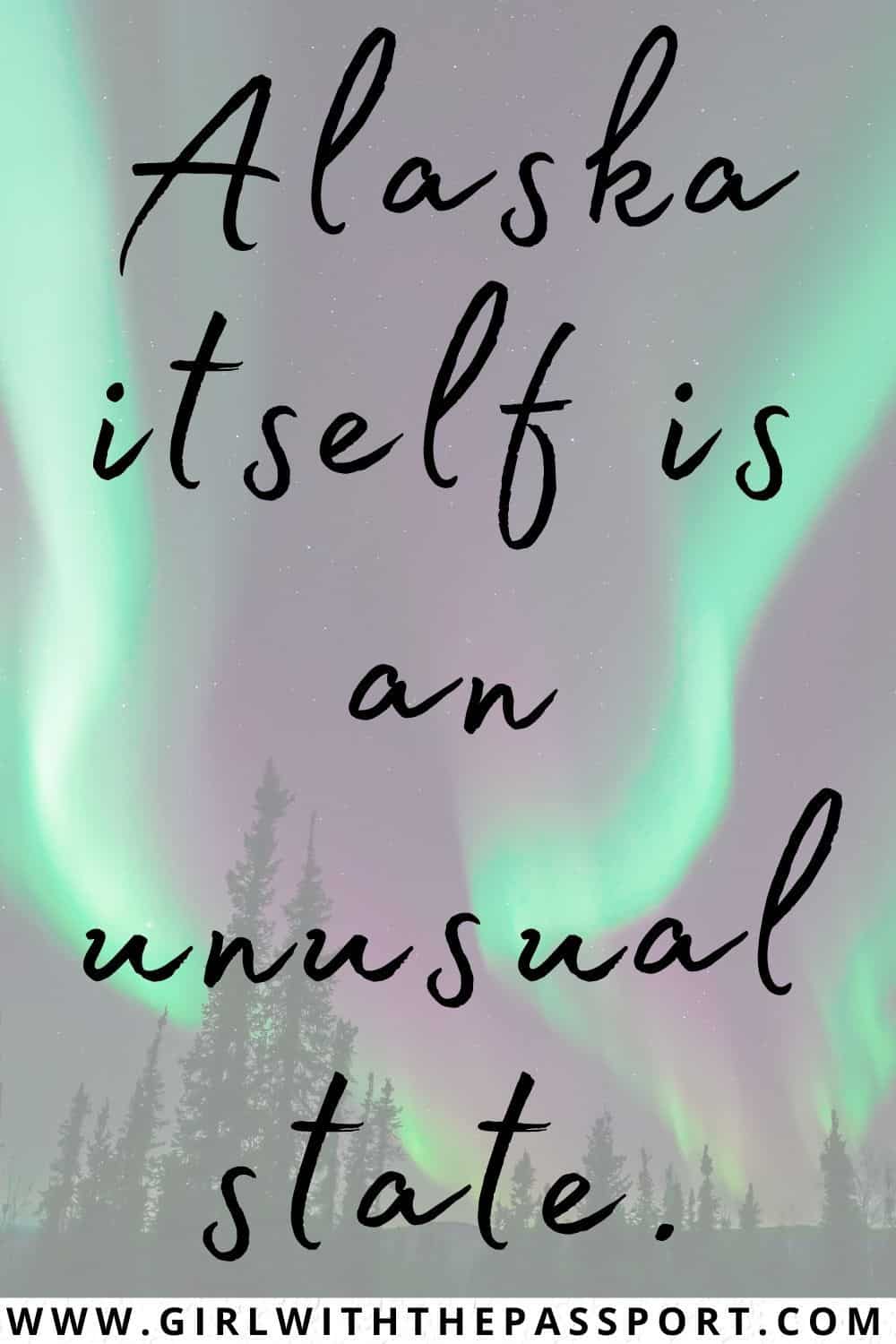 91. “A changing environment will affect Alaska more than any other state, because of our location. I’m not one though who would attribute it to being man-made.” – Sarah Palin

92. “We have a great life here in Alaska, and we’re never going back to America again!” – Simpsons

94. “Alaska herself can be Sleeping Beauty one minute and a b**** with a sawed-off shotgun the next.” – Kristin Hannah

95. “The Bermuda Triangle got tired of warm weather. It moved to Alaska. Now Santa Claus is missing.” – Steven Wright

98. “Relegating grizzlies to Alaska is about like relegating happiness to heaven; one may never get there.” – Aldo Leopold

99. “Welcome to Alaska. Here’s a thousand dollars.” –The Simpsons

100. “Oooh, if you have never been to Alaska, go there while it is still wild. My favorite uncle asked me if I wanted to go there, Uncle Sam. He said if you don’t go, you’re going to jail. That is how Uncle Sam asks you.” – Bob Ross

104. “How about Alaska? We could move to Alaska. I bet they’re not as serious about their football in Alaska.” – Friday Night Lights

107. “No take-backs! We bought this land fair and square for 2 cents an acre! #bestdealever” – Unknown

108. “Alaska itself is an unusual state.” – Fareed Zakaria

109. “Historically, Alaska is a place that has attracted those fed up with conventionality.” – Bill O’Reilly

110. “The original settlers of Alaska apparently were Russian.” – Jeff Goldblum

111. “I missed that question on Alaska. I hear they want to make it a state now.” – Anson Williams 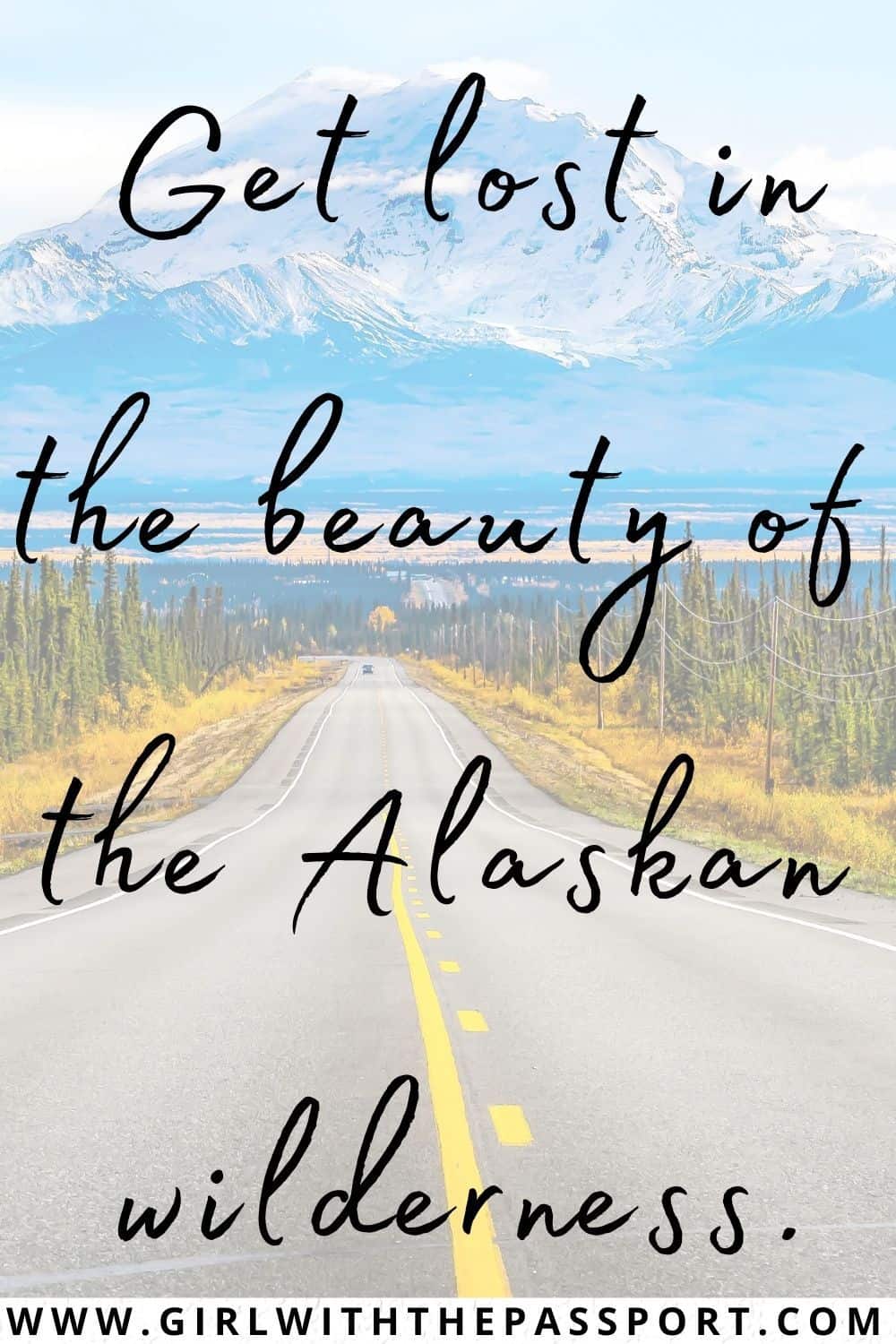 Really want to kick start your wanderlust? Then check out these hella epic Alaska travel quotes  After all, there are tons of Anchorage quotes and quotes about wilderness too.

112.. “In terms of wilderness preservation, Alaska is the last frontier. This time, given one great final chance, let us strive to do it right. Not in our generation, nor ever again, will we have a land and wildlife opportunity approaching the scope and importance of this one.” – Mo Udall

113. “The tall cityscape that was Anchorage encroached on the wide skies. It was like a giant walking and uninhabited, unclaimed land.” –Suzy Davies (one of many great Anchorage quotes)

114. “The light in Alaska, in particular, is so beautiful. So beautiful! Such incredible light.” – Sebastiao Salgado

116. “Get lost in the beauty of the Alaskan wilderness.” – Unknown

117. “The more I see as I sit here among the rocks, the more I wonder about what I am not seeing.” – Richard Proennek

120. “Nobody is accidentally in Alaska. The people who are in Alaska are there because they choose to be, so they’ve sort of got a real frontier ethic. The people are incredibly friendly, interesting, smart people – but they also stay out of each other’s business.” – Marcus Sakey

121. “This was one of the places people told me to go, it was one the big trips that you should see: Alaska.” – Jeff Goldblum

Welp, that concludes this epic guide to 120+ stellar quotes about Alaska.

Tell me, after looking for Alaska quotes in this post, do you have a fave? Or did I miss one of the most important quotes about Alaska?

If so then let me know in the comments below. And if you found this post useful, be sure to join our email list and pin it now so that you can read it again later! 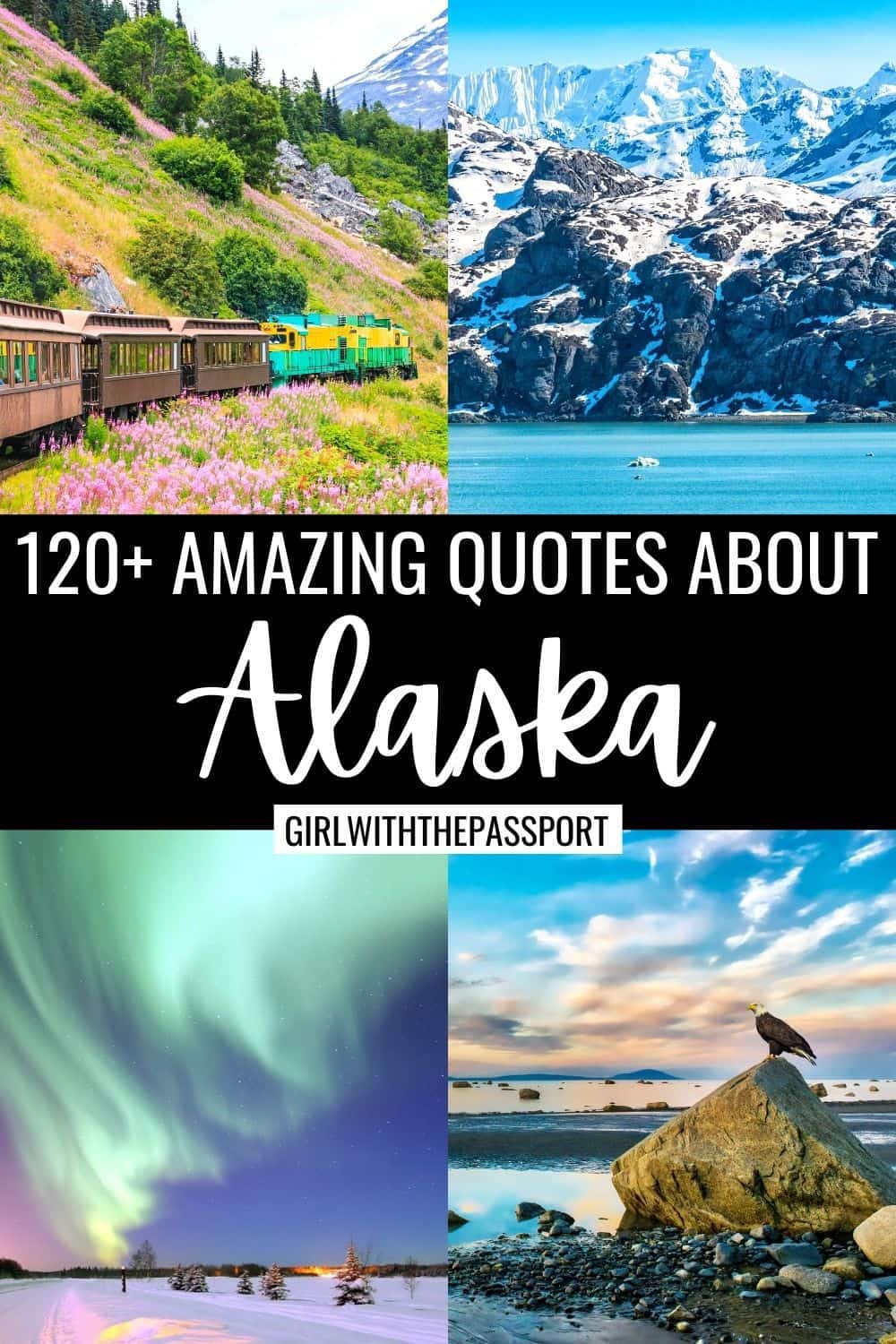 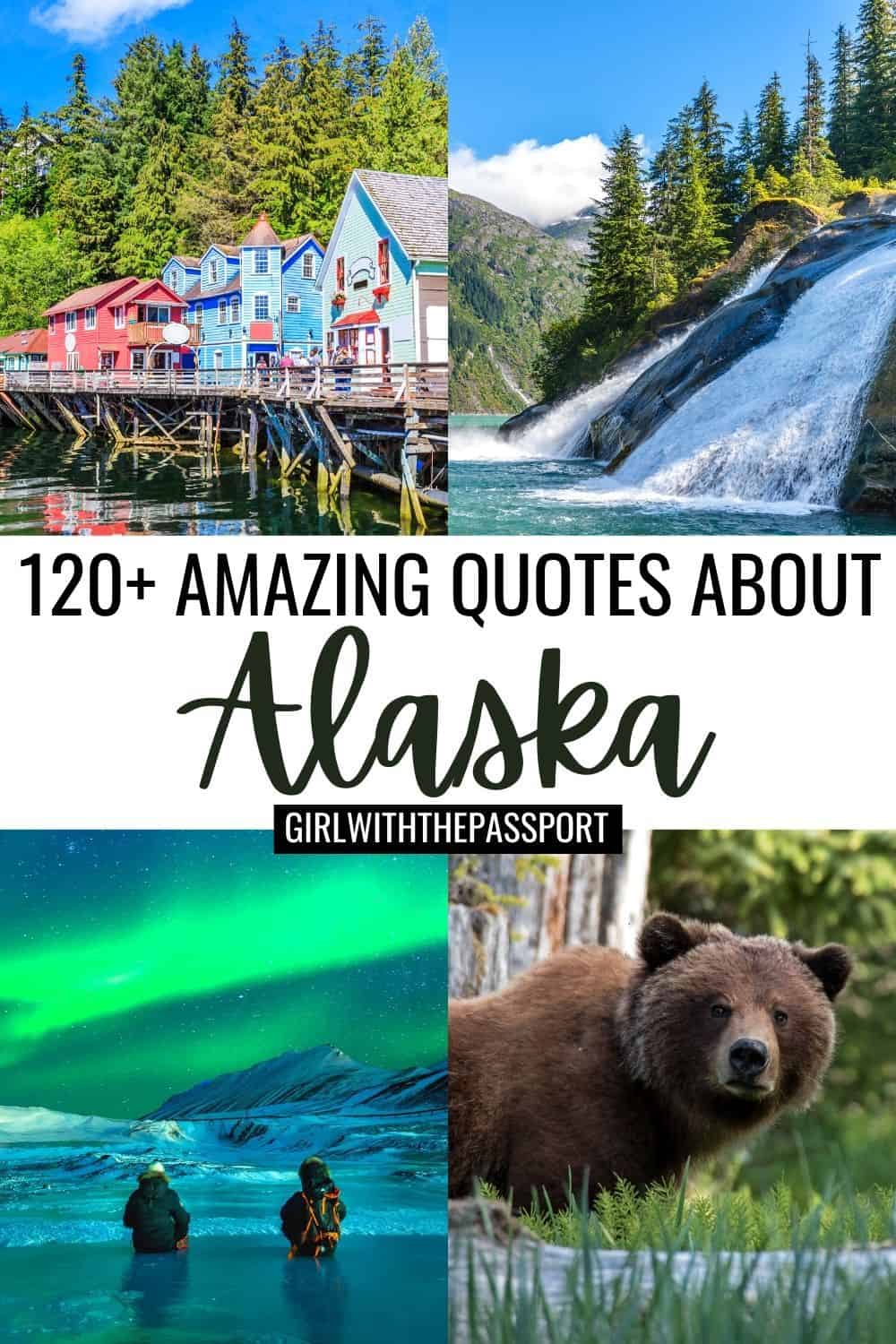